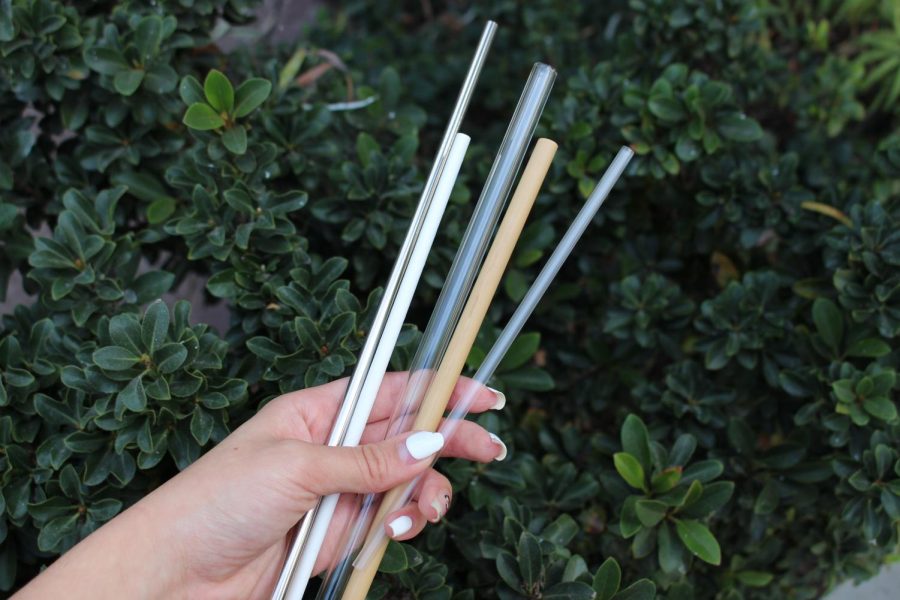 Metal, paper, glass and bamboo straws (pictured in order from left to right) are plastic straw alternatives that have grown in popularity recently due to concerns about the disposal of plastic straws. According to The New York Times, 170 to 390 million plastic straws are being used and dumped by Americans into the world’s oceans every single day.

It’s difficult to understand exactly how and when the plastic straw debate came about, but it has made its way onto most major news outlets in the past year. For years, the community took very little notice of the 170 to 390 million plastic straws being used and dumped by Americans into the world’s oceans every single day. As of January 2019, California became the first state to pass a law that prohibits the distribution of single-use plastic straws in full-service restaurants unless a customer requests otherwise. However, many local establishments like Veggie Grill, Disneyland restaurants, and Burger King, for example, have made alternative options like plant-based or paper straws available to customers in the place of plastic.

While it seems obvious that banning this plastic from stores and restaurants will help our oceans, ridding of them altogether and replacing them with non-plastic alternatives could create numerous negative effects.

The issue with banning or eliminating plastic straws outright is that some people need plastic straws in order to drink anything at all. An example of this is individuals with Duchenne Muscular Dystrophy, a genetic disorder that “causes the muscles to progressively deteriorate,” according to Ayana Archie and Dalila-Johari Paul of CNN. This disorder causes the muscles to weaken and it becomes harder for one to pick up something like a cup or a glass. For those with the disorder, it may become harder over time to use alternative straw types.

“Other types of straws simply do not offer the combination of strength, flexibility, and safety that plastic straws do,” Disability Rights Washington, a nonprofit, wrote in a letter, according to the CNN article.

Straw alternatives present an obvious negative: From my own experience, paper straws, for example, become a disintegrated mess. If you place one in liquid, it results in the bottom of it slowly breaking off into the cup. Also, you cannot use it to suck up thick liquids such as milkshakes or milk. For the disabled, paper straws add a layer of difficulty to everyday life. Paper straws cannot be recycled without much effort from the recycling company, as you cannot separate the wax coating and paper from each other very easily. With the inability to bend paper straws, along with how easily they disintegrate, paper straws become useless to people with disabilities.

Not to mention, even though paper straws are marketed as recyclable and reusable, they actually are none of those. According to Recycling Today, the wax that can be found in paper straws is actually polyethylene, a type of plastic that is widely used and recycled. In addition, the cardboard that makes up the paper straw is also recyclable. However, the wax and the cardboard can’t be cleanly separated from the paper underneath, thus leaving paper straws nonrecyclable. Even if recycling companies wanted to separate and recycle the wax and cardboard, it would be too much a laborious task to do.

Metal or stainless steel straws have also grown in popularity, but are useless when it comes to hot liquids. If stored in a bag or pouch, they can also collect germs and bacteria. Obviously, this is not good for those with weaker immune systems or memory problems, as they might forget to wash them and get ill. Metal or stainless steel straws are no longer an option if the straws can burn or injure a person with disabilities if they bite down too hard, according to Maria Godoy of NPR.

For example, in November 2018, Fox News reported that a women in England sustained a traumatic brain injury when the 10-inch metal straw went through her eye and pierced her brain. This woman had mobility issues stemming from a horse-riding accident\; the accident resulted in multiple fractures on her spine that eventually caused scoliosis, which left her prone to falling. This woman’s experience is an example of the dangers that some individuals with disabilities face.

The Restraw, a glass straw, at first was a stand-out winner among alternative straw options, according to Business Insider South Africa. However, “though it is dishwasher safe,” Phillip de Wet said in his article for Business Insider, “…the inner diameter is too small to be sure that anything other than a hand scrub will get it clean.” Glass straws are one of the most difficult to clean due to their tiny hole, which does not let a lot of soap and water into it to kill bacteria. De Wet also noted that the straws are “not one that can be carried around with any safety” as they are glass and can break easily in handbags or other holding containers. This can make it difficult for people with disabilities to clean or safely keep and use glass straws.

Bamboo straws are another option that can cause problems as well.

“These kinds of straws are the hardest of the straws to clean and can have a little bit of a chalky aftertaste,” Elinor Aspegren of USA Today wrote in her article. “Also, the absorbent bamboo material can soften, warp, and crack if left soaking in liquid.”

If a straw is not great when it’s placed in liquids for a while, it should not be in our drinks. For people with disabilities, bamboo straws can pose the same risk as all the other straws: the sharpness of the straw could pierce skin or go into their mouth’s soft palate if they have a seizure or fall.

While stopping plastic straws from entering our oceans should be of high priority, we must take into account the people who rely on them for their own safety and convenience. A good solution, reported by NBC, is to follow in the steps of The London Plane, a Seattle restaurant that “started using compostable plastic straws before the ban, which may be an ideal compromise.”