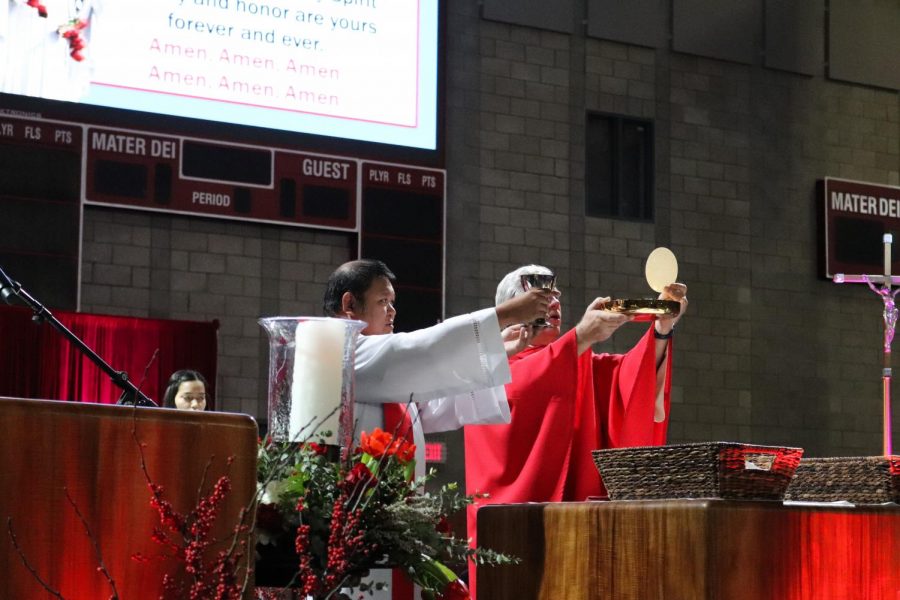 Cruz and Father Steve Sallot, the new President of Mater Dei, prepare the Body and Blood of Christ for the Eucharist. Cruz works closely with Helen Steves who has worked at Mater Dei for 32 years. “And I believe his prayerful, intentional preparation is, to me so inspiring. When you walk into a mass...you go in there and you have [for] example 100 football players, and how he takes the Word of God to relate it to their lives. When you walk into a performing arts group, and he, who is a singer himself, he's got the most beautiful voice,” Steves said, “For him to take the word that is given to us for that day. And to take it to those who have been gifted with a performing art is another thing that I admire…”

As he holds up the Chalice containing the blood of Jesus Christ, the room quiets and the thousands of attendees still in preparation for the gift they are about to receive. This was Father Mark Cruz’s third all school mass in his inaugural year as Chaplain after transferring from Santa Margarita Catholic High School.

Cruz was born and raised in the Philippines, where he attended Catholic primary school and public high school. After entering his seminary formation with the Disciples of Mary and becoming ordained in 2003, he worked on various campuses in the Philippines. In 2015 he was assigned to the United States and began as a chaplain at the Newman Club at nearby Cal State Fullerton. He went on to serve for two years at Santa Margarita Catholic High School until he started at Mater Dei school this year.

Cruz explains that his family, specifically his parents and his maternal grandmother, inspired his dedication to faith life. As a young child he was exposed to the Catholic faith and it’s various traditions and practices.

“So basically they initiated [my faith]. And then perhaps along the way, being involved also in high school campus ministry…the friendship and fellowship in faith was very keen and was very lucky…for me to be able to really get hooked into the faith as well as administering also in the parish that we go to,” Cruz said.

Despite having worked in many different areas and on multiple campuses, each move brings its own learning curves and transitions according to Cruz.

“It’s about learning not just intellectually, but learning also, holistically to experience through hearing stories of other people, through the insights…profound reflections and experiences also of those…who have been here and journeyed with students for quite some time,” Cruz said.

He works within the Campus Ministry department, alongside the faculty and staff there. Helen Steves, Director of Campus Ministry, explains that Cruz has an awareness that inspires her in the context of his transition to Mater Dei.

“I’ve learned so much from Father Mark, because of his holiness,” Steves said. “He is so prayerful. He prepares for liturgy so beautifully. He has a gentle spirit about him. And in his gentle, quiet way, he pays attention to the community, and we are a very large, diverse community.”

Senior Alizea Hinz is a Head Campus Ministry Commissioner as well as a retreat leader, Eucharistic minister, and alter server. With all of these commitments to the department she explains that she spends anywhere from 4 to 5 hours a week in the Chapel. Given her relationship to Campus Ministry, she was directly affected by the transition of a new priest coming to Mater Dei.

“Father Mark’s first semester went truly amazing. He has adjusted very well to Mater Dei and is a great addition to the Mater Dei family. He makes amazing additions to the program, and even includes Mary even more in masses and our community,” Hinz said.

Father Mark’s favorite aspect of his new home, in his short time being here, is both the supportive and collaborative spirit he sees within the community and also the dedication each department has to integrating Catholicism into their work.

“One that I appreciate this first, the intentionality of each department when it comes to exercising Catholic faith,” Cruz said. “Of course…for high school students this time we’re in, they really discern whether or how to grow in their faith and their relationship with God…But… the intentionality of each and every department of the school to nourish and walk with students in terms of their faith in discovering it, understanding it, or deepening one’s faith and spiritual journey, I think is very significant and that it becomes more helpful for students to understand and explore their faith.”