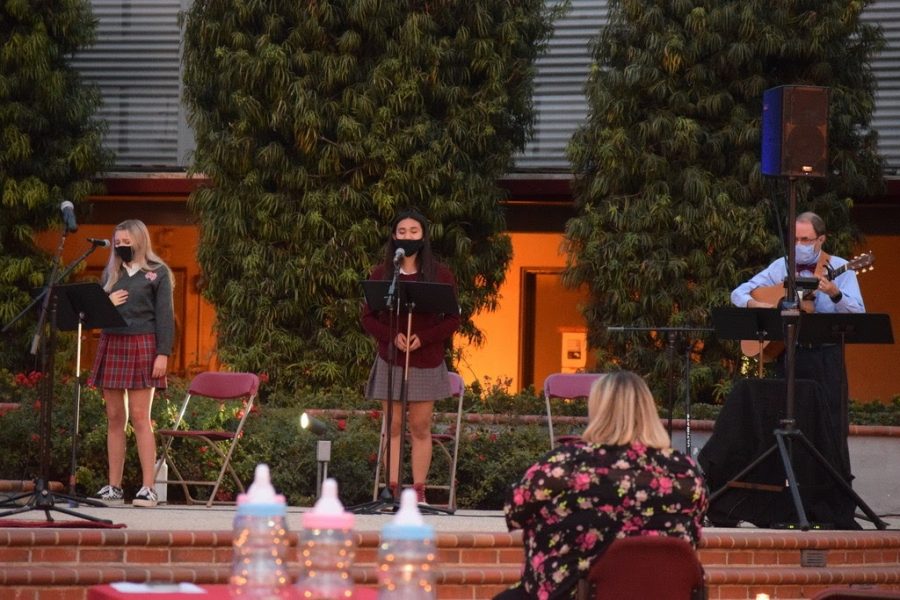 SINGING FOR JOY: Senior Reese Wineroth and junior Kimberly Pidazo sing the gathering song at the beginning of the Celebration of Life prayer service. Pidazo’s favorite song that she sang at the event was "Make Me A Channel of Your Peace." “I felt like it was very uplifting,” Pidazo said. “My favorite thing about singing is the connection I can make with people.”

The Catholic faith holds a high respect for life, with a special focus on the creation of human life at the moment of conception. During the month of October, known as Respect Life Month, the Right to Life Club advocated and brought awareness to promote the pro-life message within the school community. In order to put this into action, the club hosted a candlelight prayer service, which was held on Nov. 5.

“The goal of our prayer service is to honor the innate dignity of every human person, to give glory to God for all of the human beings that he created in his own image, and to express love for all people,” said Isabelle Tran, senior and co-president of the Right to Life Club.

Isabelle explained that she had been brainstorming ideas for events for the club to hold throughout the school year. Honing in on the month of October, she was eager to hold an event that fulfills the club’s mission. The club worked with Campus Ministry and Activities in order to plan the candle light prayer service.

“…our club’s mission is teaching people to establish respect for all walks of life,” Isabelle said. “We decided to hold this prayer service on campus in order to live out Mater Dei’s motto of ‘Honor, Glory, Love.’”

Helen Steves, the Director of Campus Ministry, helped plan the candlelight service by providing a prayer that she says “instills an awe for all stages and forms of human life.”

“…as we prepare this prayer service that will help us to intentionally remind us that every day should be respect life day,” Steves said. “Every single day should be that day. Every single day, when we wake up in the morning, we thank God for giving us life and [think about] how can I create a better life for somebody else.”

Especially during the month of October, Steves said that we should pray for all lives that have been ended and that our world is called to respect life like never before, especially in these times of uncertainty.

Steves said that as the Right to Life Club advocates the importance of respecting life, the school community can raise awareness and become educated about the value of life. She explained that she hopes the Mater Dei community can work together in creating a better world that respects life.

“Life is chosen for us through birth,” Steves said. “Then for some people through adoption, because women chose to have their babies, but we’re here in this life. What are we doing with the life that God has given us? Are we patient? Are we kind? Are we merciful? Are we forgiving? We pray for our lives here, but we pray for every aspect of these lives.”

Isabelle started the club in 2018 with Class of 2020 graduate Samantha Martinez because Isabelle felt moved to spread her knowledge about abortion since it is a topic of much discussion in American society today.

“I think I’ve always been a pro-life person because I’ve always been taught to respect human life from conception until natural death,” Isabelle said. “It’s just been a part of me so that’s why I’m so involved with the movement.”

Isabelle said the club moderator Maria Uyehara is supportive of ideas for the club and has been helpful with planning more events for the school year. In order to advertise their events, they plan on creating a social media page on Instagram. Within the club, there are volunteer opportunities for students like serving the homeless and participating in maternity and baby clothes drives.

“This year we just want to be more active than we were before,” Isabelle said. “We want our main focus to be [against]abortion and [the pro-life movement], but we also want to extend it out to all forms of life like the homeless, senior citizens, and such.”

As co-president of the club, Isabelle is open to new ideas presented by anyone, whether they are pro-life or not. She wants the club to grow and become a place on campus to be a center of conversation and understanding.

“I just want to be able to leave a legacy behind,” Isabelle said. “I want this club to continue to thrive and to bring about the message that all forms of life matter. I hope that it continues on for future generations.”

Senior Nhi Tran, the other co-president of the club, said she hopes to create open discussions about abortion. Along with being one of the leaders of the club, Nhi also had the opportunity to attend a March for Life event held in Los Angeles when she was in eighth grade.

“[The March for Life event] was very moving and it gave me hope that one day we could make a difference and start saving lives,” Nhi said.

According to Nhi, all club members should expect more emphasis on the topic of abortion and what being pro-life really means.

“I was taught that all human life is sacred, from the moment of conception to natural death,” Nhi said. “I was surprised when I heard that this issue of life and death was being presented as a matter of women’s right to choose in the media when I had always considered it a matter of the baby’s right to life.”