The Scarlet Scroll • May 7, 2021 • https://thescarletscroll.com/13465/culture/students-teachers-who-got-pets-over-covid/

Students/Teachers who got pets over COVID 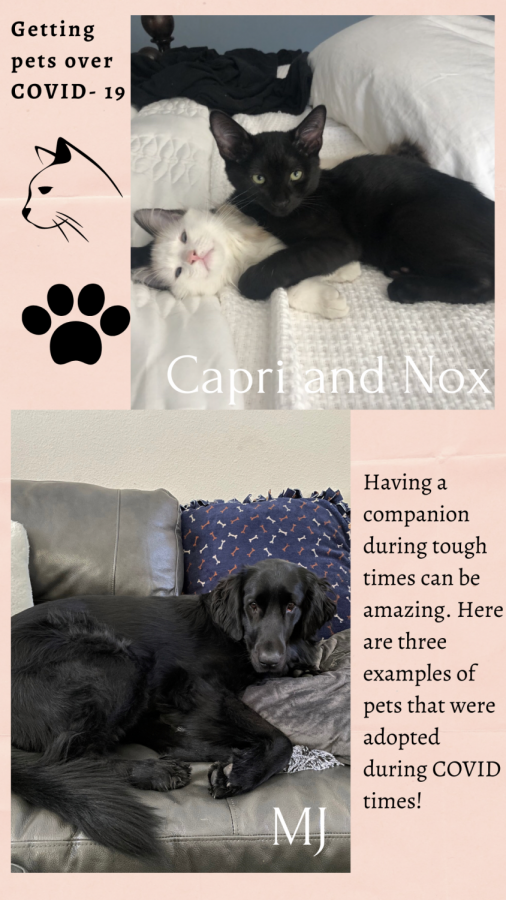 In 2020, the world went on lockdown. It wasn’t an easy time for many, having to stay away from friends and family during quarantine. Because of this, many families acquired new companions since the pandemic hit: pets.

This craze brought many new additions to staff and students’ homes. Junior Danielle Howard is one of these many people to get one or more pets during this time. Her family welcomed a black cat named Nox and half Siamese white fluffy one named Capri. After her previous cat Anise died, Howard said she was ready to invite a new kitten into her home. Especially since her cat, Buttons, needed a new companion.

“Our cat, Buttons. She’s grown up with cats her whole life. And we’re not always there to give her attention,” Howard said.

The Howard family decided to adopt their cats from a foster home not only because it saves money, but to give the cats a permanent home.

“It’s [just] so much more beneficial to save an animal,” Howard said. “The shelter will give [the cats] to families so that those families can take care of them.”

Initially, she was going to only adopt Capri, but after reading an article about discrimination against black cats she decided to adopt their third cat, Nox.

“I was like, ‘I need both of them. I cannot leave this one,’” Howard said. “It’s so sad that animals get put down anyways, but because of a superstition, black cats are more susceptible to not getting adopted.”

Adopting two new cats is a big decision, and making sure they’re acclimated to their new environment is an important part of introducing a pet to their new home. One of Howard’s fears was that Buttons wouldn’t get along with her new two-month old kitten siblings.

“I thought that the older cat would be a problem because you know, she’s been there longer. She’s kind of territorial, but the little ones were mean,” Howard said. “I had to have them, literally in my room for two weeks, and it was gross but we got there. They’re still kind of mean to each other, but they still coexist and it’s fun.”

Three cats means a lot of litter and constant attention, which is totally new to Howard since she has only ever had two cats.

“It can be difficult to take care of them,” Howard said. “They definitely were a nuisance because they would sit on my lap while I was online on Zoom. My black one, he loves to crawl up my whole body. He’d be doing that and I’d be in AP Literature and I’m like ‘Okay, my whole class just saw my cat climb up me.’”

Just like Howard, Executive Director of Educational Technology & Online Learning, Samantha Olsen also got her pet at a shelter. They both needed some new light in their life after the loss of a cherished pet.

Olsen got a dog during this crazy time. She said she wanted to “fill the void” when one of her dogs had unfortunately passed away.

“I just happened to get the same breed so that he would bring back some memories from my last dog, but also just to have another pet around to hangout with, and be able to love all of the time and have as a companion,” Olsen said.

Having pets is a lot of work, but Olsen said coming home to a friend everyday is nice and refreshing to have around especially while being locked up and not being as free as before.

“Just knowing that you always have your dog to come home to, and that they are always going to be there to snuggle with you and hangout with you, and it’s just really nice to have that around,” Olsen said.

Olsen has a two-year-old flat coated retriever who enjoys his walks. Despite the virus being a huge roadblock, she is able to find ways to do activities with him.

“He loves going to this park that’s by my house, and playing with other dogs,” Olsen said.

During the start of this new norm, it took a huge amount of adjusting from being together with large groups of people to being six feet apart and wearing face masks when needed.

“When everything got shut down last year, he would be in the room with me when I was teaching so when we all got sent home back in March he would get up with me in the morning. We’d go for a nice little walk and then he would just sleep next to me while I was teaching,” Olsen said.

As conditions started to improve, students and faculty were able to attend school in-person while following the proper guidelines. Gradually adjusting back to normalcy is a good thing but now Olsen’s dog MJ spends more time alone.

“He’s just at home and hopefully not getting into trouble, but when I get home I spend about an hour to two hours with him hanging out. We go out on walks, we play fetch, [and] we do some training exercises so I just try to give him the attention that he’s not getting throughout the day,” Olsen said.

Quarantine was a tough time for everyone and it came with a lot of hardships and having companionship and love was needed. Howard and Olsen both decided to get pets to help during this new norm.

“So I think that at the time, back then, seeing everyone else get new pets was really hard to see. It was interesting because I [had] just lost one,” Howard said.

After losing a pet it’s not an easy process to go through, but having new pets helps to fill the emptiness and craziness in their lives.

“Then, it just helps to make you not feel as lonely,” Olsen said. “You know when we went through the first stages of quarantine when people were staying home and not really going out at all, it was really isolating.”