Interacting with law enforcement in 2021 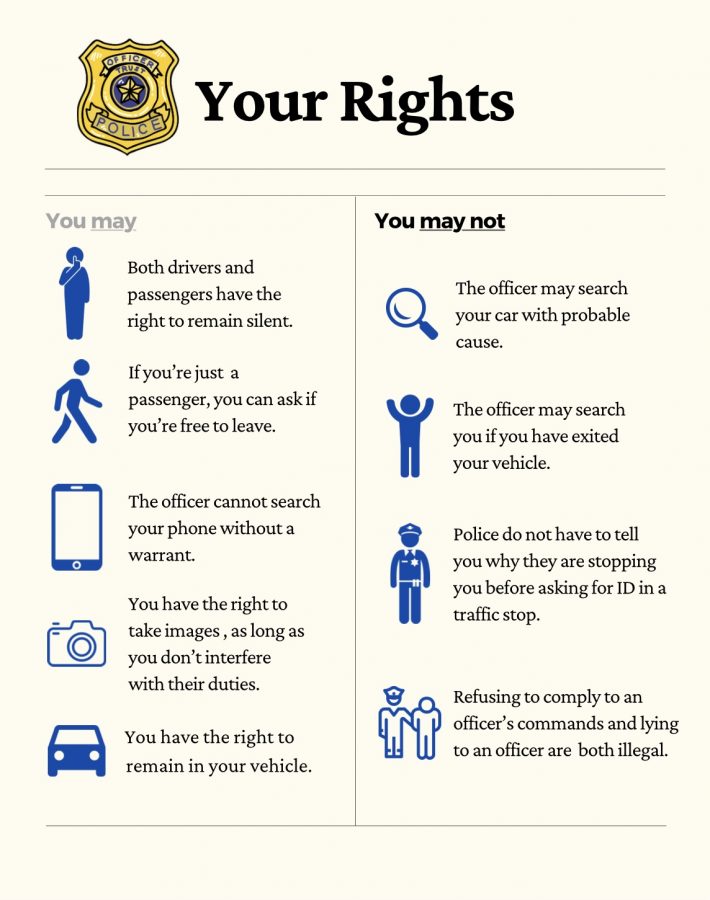 After the events of the past year and a half, including the opposing Black Lives Matter and Blue Lives Matter movements, the stigma surrounding interactions with law enforcement has only grown.

Everyone has their own thoughts on the issues, but ultimately, you may find yourself having an interaction with law enforcement for one reason or another during your lifetime and it is important to understand your rights and the proper procedure for interacting with the police.

On average, 1 in 5 students at the school who have been driving for 6 months or longer have been pulled over.

One such student, junior Jared McDuffie, was pulled over after checking his phone while driving.

McDuffie stated that although he was unaware of the procedure, he was not nervous about interaction, instead, he felt regretful that he was pulled over. After the experience, he would only advise following the law so as to avoid being ticketed.

Unlike Jared, for most young drivers the thought of getting pulled over is daunting. Not only due to possibly receiving a ticket, but because of the inevitable interaction with police.

The chance of getting pulled over while driving is high, but drivers who know how to properly conduct themselves and know their rights when interacting with police are not as common.

When religion teacher Alec Sixta was pulled over for not having license plates on his new vehicle a few years ago, his interaction with police only heightened his nerves.

Fear is a typical response to the realization that one is about to be pulled over. Perhaps it is because of fear of punishment, or because of predisposed notions of police officers created by the media and the entertainment industry.

“There’s this innate bias that has been created by society,” Sixta said. “And when that situation presents itself, I react the way society has told me to do, which is in this case [is being] nervous.”

In the past year, the media has highlighted stories of people of color in America being discriminated against and even losing their lives due to interactions with police. In 2020, the names George Floyd, Breonna Taylor, Elijah McClain, and a plethora of other people of color who were killed in relation to interactions with police officers became synonymous with the #SayTheirNames and Black Lives Matter movements.

These nationally publicized events have caused a number of people in the United States to distrust and dislike police officers.

In order to create a safe environment to foster change in the interactions between civilians and law enforcement, it is essential to know one’s rights and what one should and should not say when interacting with police.

Peter A. Zarcone, a recently retired LAPD Commanding Officer and father to a 2020 graduate of MD, has been on the force for over 30 years and experienced traffic stops from the perspective of both the civilian being pulled over and the officer pulling someone over.

“When I was working patrol, I would typically make between 5 and 10 stops per shift,” Zarcone said. “Most officers working patrol will be close to that range. There is always a reason [as to why officers pull drivers over] — an observed traffic or equipment violation, reasonable suspicion of a crime, or probable cause for arrest.”

If you see the flashing lights of a squad car behind you, you should turn on your right blinker and slowly and carefully pull over to the right-hand shoulder of the road as soon as you feel safe to do so. You have the right to wait to pull over until you can stop in a well-lit area where you feel safe. Just be sure that the officer pulling you over is aware that you see them and are preparing to pull over so they do not think you are attempting to flee.

When you are pulled over, it is important for you to understand the proper procedure and the best way to avoid any negative escalation of the situation.

“People should know that the best way to stay safe is to comply with the officer’s instructions,” Zarcone said. “It is a very bad idea to get confrontational. Turn off the stereo, get off the phone, roll down your window, and stay seated with both hands on the steering wheel unless the officer instructs you to exit. The officer has a job to do. It might be simply to issue a ticket or a warning, but he might have a reason to believe you have been involved in a crime and need to detain you. Never argue, just do what he or she says.”

To reiterate what Zarcone said: when you pull over you should turn off the radio, get off the phone, turn on the interior lights if it is dark outside, roll down your window, and stay seated with both hands on the steering wheel until the officer instructs you to do otherwise.

Once you are approached by police, be polite and respectful and comply with any instructions they give you. You will be asked for your license, registration and proof of insurance. Then they will return to their car to run your information through their computer and perform a background check.

Be cooperative and give basic information when requested, but do not give the police any unnecessary information. You have the right to remain silent.

You also have the right to not allow the officer to search your car or cellphone without your consent or a warrant. But if the officer believes they have probable cause or you are arrested during the traffic stop, they can search your car.

“I can’t overstate the importance of compliance,” Zarcone said. “Once everything is over, if your belief is that something was improper, you can request to speak to a supervisor, or call one later after the officer leaves.”

For more information about traffic stops in California and your rights visit: