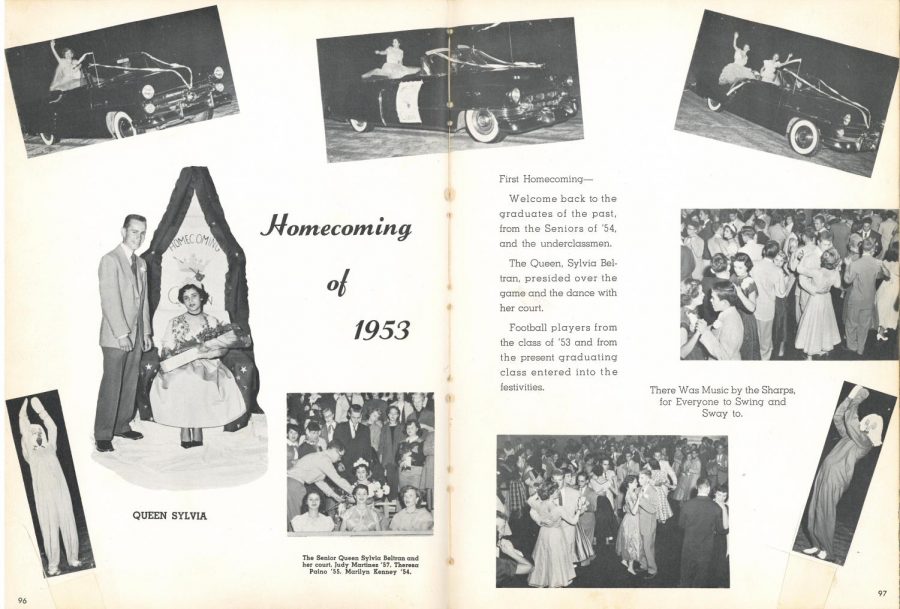 Mater Dei Homecoming 1953 THE FIRST OF MANY: The Homecoming of 1953 was the first homecoming in Mater Dei history. The ‘50s was a defining decade for fashion where many new looks, styles, and silhouettes rose to relevance. The rise of the “New Look” by Christian Dior in the late 1940s, which was considered big and bold for the era, opened the gates for new ideas and shaped fashion history. The “New Look” had full dress skirts and a padded bust to accentuate the waist. Popular dress silhouettes of the time were the swing dress, which was tea length [3 to 4 inches above the ankle], and full-skirted, and the pencil dress which was form-fitting. Popular cocktail and evening dress silhouettes were commonly made from silk, taffeta, lace, or velvet. The necklines were high and round in a V shape and had minimal trim.

Fashion is a reflection of eras – a reflection of time, always evolving, and always changing like the world around us. Many people look to fashion as a way to interpret history. For example, during World War II, the wedge shoe rose to popularity in the U.S. due to rationing on leather, and women began to don trousers because of their new place in the workforce. The evidence of fashion evolution can be seen over many eras, and an example of this evolution can be seen in dance attire.

Allison Bergeron, Director of Communications, is an alumnus as a member of the 1996 graduating class. She recalls the homecoming attire trends from her days in high school.

“It was [the …] early to mid-90s, and velvet and sequins were really popular for a lot of the dances,” Bergeron said. “In those days, you weren’t allowed to take your shoes off at a dance, or you would get detention. [One] thing that was pretty popular was we would get the white patent or leather Steve Maddens and then take the shoelaces out and put bows in there for the laces so that we would just be in cute little sneakers for the dance.”

Many people see the 1990s as the rise of pop culture and a new era of expression. In the ’90s, many styles rose to relevance. For instance, the preppy look, which heightened in popularity with the release of the teen movie Clueless in 1995.

The ‘90s additionally began a trend in more casual dress, as seen in the shorter homecoming dresses of the present compared to the long dresses of eras past — now considered very formal. After the ‘80s, which was full of bright colors and larger-than-life ensembles, people turned to minimalism and looked to vintage clothing for inspiration. Despite this, ‘80s fashion still lingered, evidence which can be seen in the rise of the grunge style. Bergeron noted that many students wore formal grunge attire to her school dances in the ‘90s.

The rise of the grunge style in the early ‘90s is commonly attributed to an independent record label based in Seattle called Sub Pop, which was established in 1986. The record label marketed much of its rock music as “grunge” due to the unclean sound of the recordings. This heavy metal, punk rock sound inspired this new, gritty, laid-back clothing style. One remnant of this style that is still in many people’s closets today in the form of Doc Martens.

In the late ‘90s, grunge faded into the background to pave the way for the resurgence of feminine styles. In womenswear, pieces like the slip dress were especially popular for formal attire, which many saw as the epitome of minimalism.

“Sometimes we put flowers in our hair — I have some dance photos of Baby’s Breath in my hair,” Bergeron said. “Pastels were kind of a big trend. I don’t think I ever wore black to a dance. I always wanted to have color but a lot of floral patterns were popular in the 90s.”

Bergeron got her dance attire from popular ‘90s clothing stores and followed some of the “dance” trends.

“I used to shop at Charlotte Russe, Windsor Fashion, [and] Jessica McClintock, but I don’t think those exist anymore,” Bergeron said. “I wore a cranberry red velvet cocktail dress and it had a lot of sparkles and detail up top. What was really popular is you would take your shoes [and dye them] the same color as your dress.”

Coordinator of Parent Giving and Assistant Girls Beach Volleyball Coach Whitney Pavlik-LeVecke is another Mater Dei alumnus, from the class of 2002.

“There were a lot of girls wearing their hair up with hair strands coming down and longer dresses. I don’t really know what the rules are now but they were very strict on the length, so everybody wore long [dresses]. They were two-piece outfits, so it’s almost like a tank top with a high skirt,” Palik-LeVecke said. “A lot of sequins, big hair, all up hair, and spaghetti straps were very popular on all the dresses.”

Pavlik-LeVecke suggests that school dance attire for women and menswear has changed since the founding of Mater Dei to the present.

“I definitely think it was more glamorous back then in the 50s, and even if you look at the pictures in the yearbook, these women, and guys, that are 16, 17, [and] 18 have perfectly big hair, look stylish, and their makeup is way thicker and you would seriously think they’re in their 20s. And the guys have the perfect comb-over, no hair out of place, which now it’s definitely more freedom with men’s haircuts,” Pavlik-LeVecke said. “Now I think [clothes are] all very tighter and sleeker compared to then. I think the guy’s suits kind of almost made a little bit of a whole turnaround with this style. Now they have tighter pants sometimes, skinny ties and bringing back a little more of different eras.”

In the late ‘90s and the early 2000s, the men’s “dressy style” emerged in the form of khaki pants, blazers, and dress shirts. This new hybrid-formal look is an evolution of the preppy style popular in the ’80s and early-mid ‘90s.

A ‘90s icon, Brad Pitt was often seen in this look during that time, with his khaki pants and white t-shirts. Another new style of the early 2000s is Y2K. The pioneers of this style were thought to be NSYNC and Britney Spears. Y2K was the blending of pop culture and technology. Y2K style is indicative of bedazzled purses, metallic jackets, and bubblegum pink everything.

Dr. Francesca Po, a religion teacher, who graduated in 2000, witnessed this fashion trend in its early stages.

“There were a lot of princessy dresses, really big skirts, and I remember there was a lot of glossy stuff too,” Po said.

Though this fashion trend is a thing of the past, it has recently made a resurgence back into relevance. Things like baby tee’s, wide-leg jeans, double denim ensembles, Juicy Couture tracksuits, and glitter are popular again. The early 2000’s are back — with a little bit of 2021 flare.

“I think for homecoming now, [girls especially], like to wear short dresses. Before, it [was] always longer gowns and all that. It’s definitely shorter [now and] more revealing,” Nguyen said. “The dresses have two straps and I feel like today everything is more sparkly and glittery.”

Though Nguyen believes that women’s dress attire has changed, she does not hold the same regard for men.

“I would say little to no [change] actually. All they wear is a shirt and black or khaki pants or some other formal attire,” Nguyen said.

“I also really like it when guys don’t just rent a suit. So I think when I was in high school, most guys still just rented suits. Now guys will actually go out and get a cool blazer and I think it’s really nice when the guys really go out of their way to pick out the blazer, their pants, and the shirt,” Po said. “I don’t really like plain ties. I like it when the guys pick out fancy bow ties and tie them into a Pratt [knot] or something. So, I like how guys have evolved to really pick out the pieces.”

When Po was in high school, there was another resurgence of past men’s fashion for formal wear.

“The guys would wear zoot suits too,” Po said. “That was one of the options and things that they wore. Zoot suits were 1940s attire. That’s so cool [and] that was an option that guys wore.”

Next to the more mainstream style, Y2K is the more alternative “punk” look and is also associated with grunge. This look includes articles like skinny jeans, studded belts, checkered vans, and band t-shirts. This style not only extends to casual attire but dress as well.

All things evolve and change. This means that people have to enjoy the moment before it disappears, which means that all students should enjoy the wonderful opportunity that is school dances because they aren’t going to be in high school forever.

“I think it is really cool about how dances have evolved in the modern-day. It’s not just a dance, it’s more of a spectacle or an event.” Bergeron said. “I think that’s pretty special.”