The return of the student section 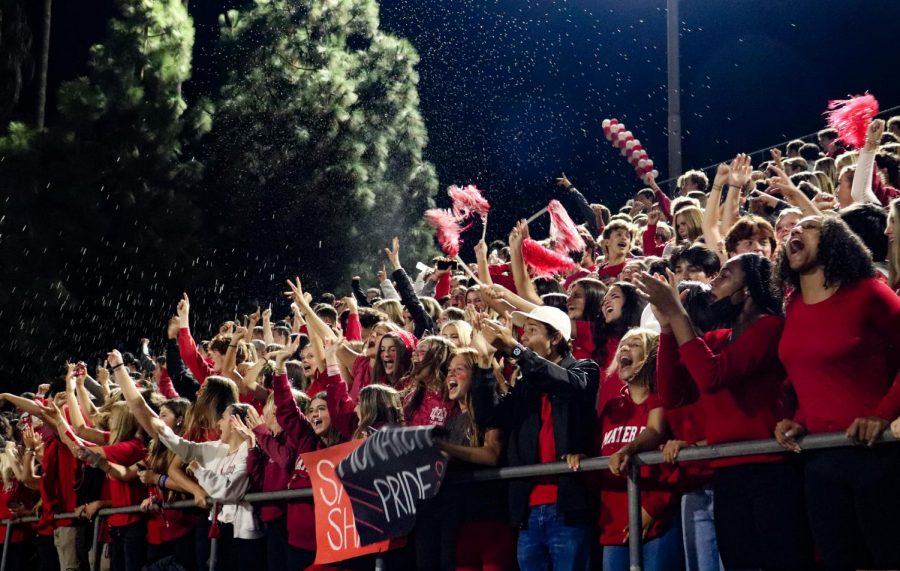 THE DEN: The Mater Dei student section celebrates a touchdown during the Varsity game versus La Mirada. Students from every grade level make their way to the Santa Ana Bowl in order to support their fellow Monarchs. “It feels so exciting to cheer on a team that’s winning,” yell leader and senior Gina Genova said. “You can barely hear yourself because everyone is screaming with you.” (Photo courtesy of Rachel O’Sullivan)

Cheers, yelling, music, and fans fill the stands at every Mater Dei football game. Mater Dei’s Varsity Football Team is back in full action this year after the previous shortened season.

Due to COVID-19, the Trinity League games were cut down from ten games to five last season. Students and supporters of the team were limited in attending games, and most who were able to go were family or close friends of the athletes. But with the Santa Ana Bowl back to full capacity for the 2021 season, the Mater Dei student section was able to make its return.

The student section, known as The Den, is packed weekly with Mater Dei students involved in activities ranging from athletics to performing arts. The Den is active at every football game, including both home and away games. If you are looking for a Mater Dei student on a Friday night, chances are they’re cheering on their fellow Monarchs.

Senior Britaney Nguyen is one of the students that frequently attends the games. She gets to games early in order to score a good spot at the front of the student section to cheer on the team.

“[The student section] establishes a sense of community with everyone,” Nguyen said. “Being able to have pride in our school, because we go to one of the best schools in the nation, is important.”

Nguyen has been going to football games since her first year at Mater Dei. She was on the cheer team and attended all the games her freshman and sophomore year. After junior year and the limited season, Nguyen decided to quit the cheer team and root on the players from the student section. Nguyen feels a sense of responsibility in cheering on the team.

“Being the #1 football team in the nation, I feel like it’s important to root them on and have school pride,” Nguyen said.

Nguyen has been to every football game in the 2021 fall season, and plans on continuing her tradition. She has become notorious among the students for creating signs with various slogans and phrases to root on the players and other students. This hobby of hers has brought students together and made the stands more enjoyable during some of the slower moments.

The players on the team have also noticed the new surge of pride spread throughout the student section. Junior and Varsity player Jacob Sanders expressed how full and lively The Den has been this year, and how it has helped the team.

“I believe in energy. Players [have] energy and the crowd [has energy],” Sanders said. “When a big play happens that can turn the tide of the game, hearing your fans cheer for you lets you play with an extra sense of pride. You feel more calm, like you don’t feel as much pressure.”

The student section has lots of energy, in part due to the yell leaders that sit in the stands or on the field, guiding The Den in cheering on the players. The yell leaders start chants to get more involvement from students, and help make the big plays even better.

The yell leaders were very limited in cheering on the team during the 2020 season, making this year feel like a comeback. Senior and yell leader Madison Reaves has been waiting to become a yell leader since her sophomore year, upon being interested in the team when she was a freshman. Because of Covid-19, she was unable to be a yell leader last season, but was given the chance this year.

The Den has been an opportunity for students to meet each other and join in a common interest— Mater Dei Football. Due to the amount of students in attendance, the stands are packed full, making it easy to meet new people and start new conversations. Not only is the student section bringing supporters together, The Den is also connecting players to the fans.

“It does do a lot for us, believe it or not,” Sanders said. “You know, we’re just grateful and blessed to have friends and family members that support us.”

The previous year of hybrid learning and limited school events has given students a new appreciation for time spent together. Freshmen and sophomores are getting their first opportunities to watch the team, and juniors and seniors are finally getting it back. Students are cherishing every moment spent supporting the team and their fellow Monarchs.

“Take every opportunity,” Reaves said. “Don’t take it for granted. Go to all the events, go to the games, just take in the Mater Dei experience. You’re not going to get it for life.”