The makeup designers of theatre 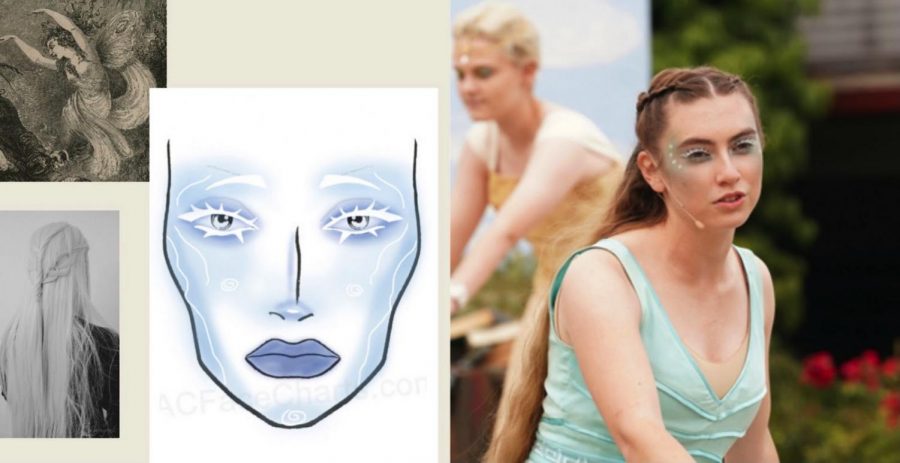 EXPECTATIONS VS REALITY: On the far left are reference images that makeup lead Kemper Rodi and the rest of her team used for inspiration while designing makeup looks for the character of Ariel in The Tempest. The middle image is the initial design for her makeup look, while the image on the right is the final look used in the show. These pictures show how makeup looks can change over the course of production. “While I do love my makeup looks and I do have very high expectations for them, some of those expectations are not realistic.” Rodi said. “While I was doing The Tempest, I had this huge [idea] for Ariel where I wanted Ariel completely painted white, but then we got into the process and we realized that [the concept] would be a conflict with [the other characters] costumes. So I had to basically narrow it down [and modify] the look.” (Photo courtesy of Kemper Rodi)

After over a year of being off stage, the theatre program put on their production of The Tempest in the Grotto. One aspect of the show was its use of makeup and hairstyling to help define the personalities of the characters.

The final makeup looks for The Tempest and similar productions take months of planning and preparation. From receiving the script to putting on the show, the makeup designers of the theatre department work to bring the characters to life.

The first step for the makeup team in productions like The Tempest is asking questions about who the characters are and what their style would be, such as the age of the characters and whether they would have heavy or natural makeup.

Member of the makeup team and sophomore Sam Wurts explains how those questions extend to the time and setting of the play.

“You have to look at history, look at how the style would have been at the time, [and] how they would have done their hair and their makeup,” Wurts said.

Lissa Slay, the director of the theatre program, and other tech leads give their input on the designs and consider how to improve them to best suit the production. Costume designers especially collaborate with the makeup team so that they can coordinate colors and styles for the individual characters.

“You have a lot [of] creative freedom,” Lewis said. “You also get to really see the director’s vision and what they are thinking about [and] it makes you feel more connected to the project.”

The next step of the process begins during tech week, which typically takes place the week leading up to a theatre production. During this week, the cast and crew prepare for the show by doing dress rehearsals and run-throughs of various portions of the show. By tech week, the makeup team has their final designs drawn out and begins to test how they actually look on the actors, taking into account their skin type and needs.

“I’m testing these makeup looks I have never actually tested on people,” Rodi said. “I’m seeing [if] this works in a timely manner. Do I need to change the mode of contour? Do I need to move the blush? Then I get to make modifications and those modifications progress through tech week.”

As tech week progresses and makeup designs are tried out, they are often revised and modified to be more practical and easier to complete on opening night.

On the actual day of the show, the makeup designers come early to do the actors’ makeup before they get them into costume. Once the makeup looks are completed, the makeup team stays backstage to do touch-ups and help with any last minute mishaps.

“While some makeup looks are very simple, it takes a lot of work and precision to get a look right. It’s definitely not as easy as it looks,” Rodi said. “I think that it is a very important department and I will fight for that.”