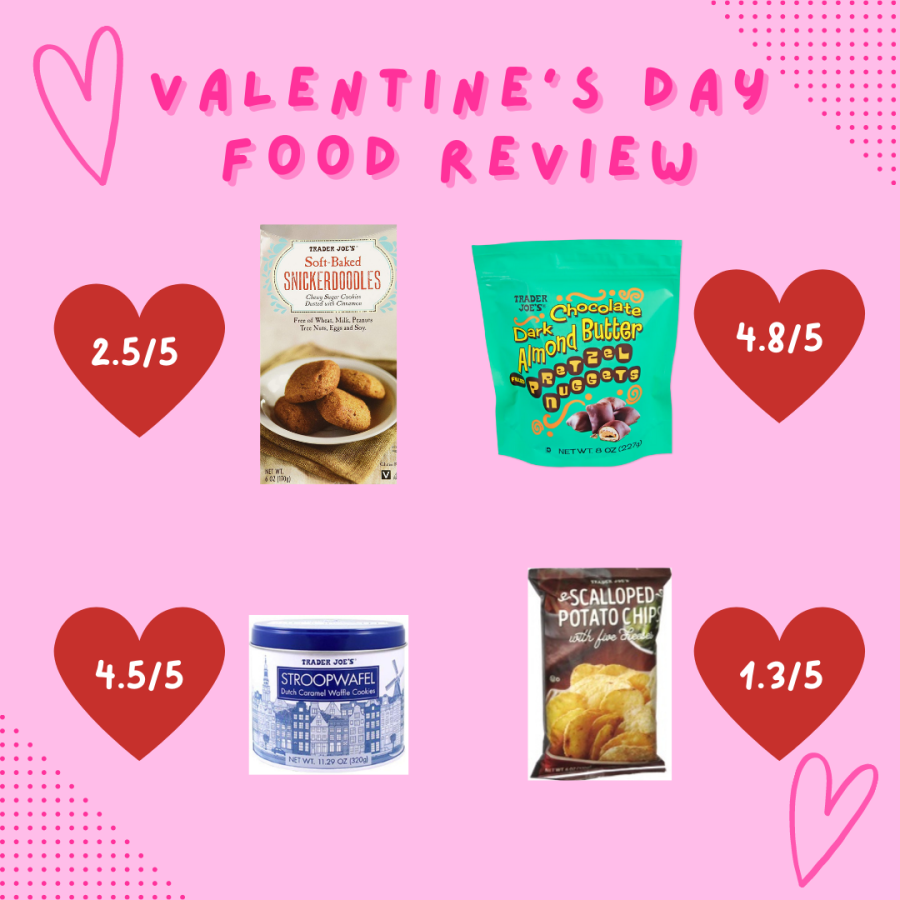 The season of love has officially come and gone, and with it came fun color schemes and new takes on classic Valentine’s Day themed foods. Although staples like chocolate covered strawberries and other rich sweets are still largely associated with the popular February holiday, grocery stores like Whole Foods and Trader Joe’s have now started offering new seasonal items. Such foods include heart shaped cookies and cakes and pink colored items like chocolate covered almonds and cookies.

As we did in our last food review, MD Student Publications tried four different seasonal items and shared their thoughts on the seasonal, new food.

The first item was the Dark Chocolate Almond Butter Filled Pretzel Nuggets described as, “the marriage of creamy almond butter wrapped in a salty pretzel, with a luxurious dark chocolate coating.” The pretzels were well-liked amongst the publications staff, with their crunch being, as one staff member noted, “delectable.” Trader Joe’s outdid themselves and was given a high average rating of 4.8/5 from the publications staff.

The next item was the Scalloped Potato Chip with Five Cheeses –a crisp, thin chip with flavorful cheese powder and scallion onions. This item was not enjoyed amongst Student Publications, as the “cheese is too cheesy.” As a result, the average rating of these chips was 1.3/5.

Next was the Stroopwafel, a classic Dutch treat. The Trader Joe’s website describes it as “a dough that’s thicker than typical waffle batter pressed in a waffle iron and quickly cut in half while still hot. A gooey, stretchy caramel is slathered between the two pieces, forming the most delightful waffle sandwich cookie you’ll ever encounter.”

MD Student Publications quickly decided that this Stroopwafel was worthy of all of the Valentine’s day love and deserved to be ranked highly amongst other competitors. With no complaints, the Stroopwafel received an above average rating of 4.5/5.
The final item of the tasting day were the Soft-baked Snickerdoodles, which on the website are described as, “chewy sugar cookies dusted with sugar and cinnamon.” The snickerdoodles were highly controversial among the publications community. From the crumbly texture to “weirdly sweet” sugar coating, the cookies were met with mixed reviews. With a ranking system as low as one and as high as five among the crew, the snickerdoodles were rewarded with a 2.5/5.

Let us know with the poll on the home page your favorite Valentine’s Day treat!