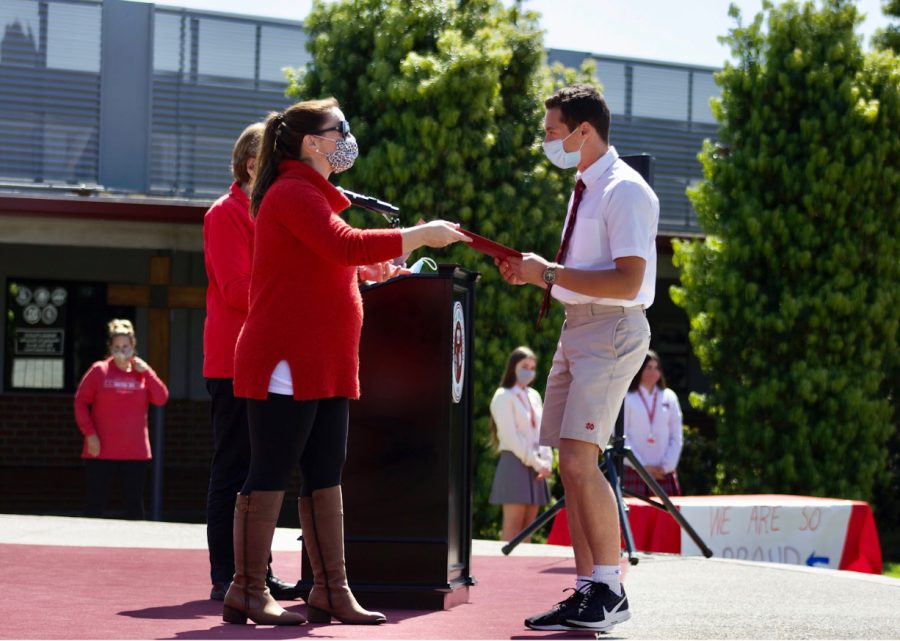 AWARDS IN THE ARTS: Assistant Principal of Academics and Technology Molly Chace hands senior Anthony Duilio his Renaissance Award. Chace believes that awards and honors like the Renaissance Award allow students to be recognized for their GPA improvement and success each semester. “At Mater Dei, our goal is to develop resiliency, grit, and [a] solid work ethic,” Chace said. “These tools are going to serve a student forever, even after they graduate.” (Photo courtesy of Monique Rivera)

With its 140 National Merit Finalists, 75 available honors and Advanced Placement (AP) classes, and prestigious status as an Apple Distinguished School, Mater Dei’s Reputation as an academically rigorous high school seems fitting. However, when almost half of the class of 2021 graduates with grade point averages (GPA) of near-perfect 4.0’s, one might ask the question of “Does a college preparatory education live up to its own high standards?”

Senior Hannah Nashed has maintained a GPA of over 4.0 for the entirety of her high school career, and has been an active leader in activities like Mock Trial, Key Club, and Associated Student Body (ASB). However, despite her academic and extracurricular accolades, Nashed still feels as though her status as an honors student does not hold a significant amount of importance because of how easy it is to attain a high GPA for students like her.

“Honors students should be the people who [are] dedicated to their studies [and have] done the most [in] extracurriculars,” Nashed said. “But having a baseline [honors] GPA is so easy to get, especially with so many [courses] to boost your GPA. It [has] bothered a lot of my friends because we work so hard, and the fact that we have to compete with so many more people now for college admissions is really annoying.”

To be considered as a member of the “Principal’s Honors” list, students must maintain a GPA of 4.0 or above; this means achieving almost all “A” grades in every course a student takes. However, during her last three years at the school, Nashed’s academic performance proved that the GPA threshold required to meet such a rigorous level of honors was not as challenging as she originally thought it would be.

“The GPA that I worked for is not the GPA that actually reflects all the work I do all the time. If I tried 75% less in school, I think I would still be qualified for Principal’s Honors,” Nashed said. “Maybe even someone who worked three times harder than me, took sixteen other extracurriculars, and had a job outside school to take care of their parents might have the exact same GPA as I do. Getting on the honor roll has become sort of arbitrary.”

Senior Inge Hohenstein, a student who has maintained Second Honors, agrees with Nashed’s perspective, but for different reasons. To Hohenstein, the honor roll system at the school does not accurately reflect upon the work and excellence of all the school’s many student-artists.

“I feel like the honors system has played a huge part in how we view student achievement, but has disregarded the arts,” Hohenstein said. “Freshman year, I didn’t do theatre. People always told me that when I was picking my courses [….], I should pick things that I was willing to stick to for all four years because colleges look for determination and because it would boost my GPA. I regret that now.”

Hohenstein, as a Honors Thespian who has completed over 800 hours of work for the school’s theatre program, believes that more should be done to recognize the arts in academia. Hohenstein asserts that, because of its role as an integral part of Mater Dei’s academic philosophy, the arts should be included and emphasized in more formal academic traditions – like the honor roll.

“I think that we should really be celebrating everything that the students are doing, which includes the performing and visual arts,” Hohenstein said. “Whatever aspect and whatever path [a student] wants to focus on should be recognized and celebrated in Mater Dei’s honor roll system.”

As the Assistant Principal of Academics and Technology, Molly Chace sees the issue in a perspective that differs with Nashed and Hohenstein. In her opinion, the large number of academically successful students on the honor roll is due to the fact that the school has expanded in its educational offerings.

“Over the last twenty years, the number of honors and AP offerings have increased. We’ve increased the number of periods in a day to allow students to take more [classes],” Chace said. “A large percentage of our student body is academically motivated. [Those students] want to move on to the next level, and so will push themselves [to] take on those extra GPA points.”

However, despite their conflicting views on the school’s honor roll system and standards for academic success, these three Monarchs all share the same core belief: a Mater Dei education is a quality education – regardless of how different people view the rigor of the academics themselves.

“After spending almost fifteen years in education, I don’t think the number of honors students should diminish the value of honor roll status,” Chace said. “I think it’s incredible that ours is a school that gives people the opportunity across the board to achieve honors. At the end of the day, bestowing such a vast number of awards means we have succeeded in our mission to nourish students academically, spiritually, and emotionally – we have succeeded in educating the whole person.”