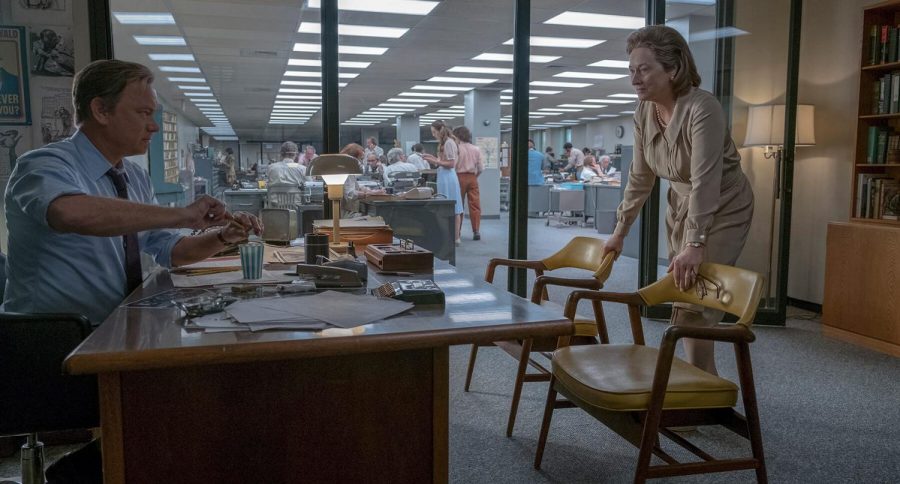 Steven Spielberg’s drama The Post highlights an important subject to all journalists: their First Amendment freedoms. Dating back to The Washington Post’s 1971 brave decision to expose and publish the truths behind the Vietnam War’s Pentagon Papers, The Post tells a true story from a journalistic perspective to emphasize the public’s right to the truth, and the journalist’s constitutional freedom to express it.

With the knowledge that the federal government had already censured The New York Times’ publication of the papers, along with the threat against The Washington Post to do the same, the publisher of The Washington Post, Katharine Graham, expertly portrayed by Meryl Streep, anguished over the decision to publish these government secrets and risk losing her paper altogether. Electing not to publish, after having already obtained the confidential documents, Graham would now be guilty of “saving face” to preserve long term relationships, just as the government had done to the American people with so many years of knowing that a Vietnam victory was truthfully unattainable. Going against the advice of her council and inner circle, Graham, along with longtime editor Ben Bradlee, played by Tom Hanks, who shared her passion for the First Amendment freedoms, courageously published portions of the Pentagon Papers, regardless of the consequences.

In a review of The Post by The New York Times, the credibility and trust, of journalists specifically, is brought to the forefront with Spielberg’s movie. Spielberg’s film illustrates the public’s present day mistrust of the media and their characterization of journalists as either good or evil, heroes or villains, truth tellers or liars.

“There’s more than a little corn and wishful thinking in the high-minded moments in The Post; movies like either to glorify or demonize journalists, relying on heroes and villains. Yet given the recent assaults on journalism and the truth, this heroizing is also irresistible,” wrote The New York Times reviewer, Manohla Dargis.

The production of The Post reinforces the promise that under the United States Constitution, no political hierarchy has the ability to suppress the truth from the American people. As American citizens we look to the media to report the truths that affect us as people of this democracy, regardless of its favor. Nixon’s attempt, as portrayed in The Post, to cease the publication of the government secrets was not effective under a court of law due to protections under the First Amendment freedoms of speech, expression and the press.

According to a survey by the American Press Institute, “Americans are skeptical of ‘the news media’ in the abstract, but generally trust the news they themselves rely on.”

While there are numerous outlets and sources to obtain newsworthy information, the truth remains the same despite the bias, origin, or platform. With something as significant as the Pentagon Papers leak, the information will surface, regardless of perceived biases.

Journalists reporting on such significant topics have a professional responsibility to be truth tellers, supported by the freedoms permitted under the first amendment. The Post masterfully addresses the present day threats against press freedom and affirms the battle between real and fake news. Spielberg’s movie effectively informs the public of the hurdles and the constantly treaded boundaries journalists face just to assert their First Amendment freedoms.

Ben Bradlee, The Washington Post editor, battled the government’s oppressions of the First Amendment, in the name of journalistic freedom, to secure his duty to report the truth to the people.

“The only way to protect the right to publish is to publish,” Bradlee said.