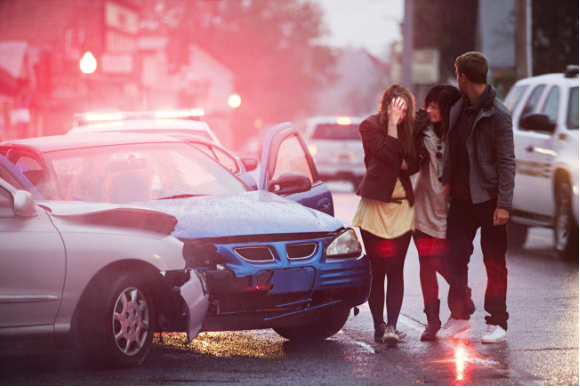 AVOIDING ACCIDENTS: Teen driving laws in California are said to be justified by the fact that, for teens, car accidents are the leading cause of death.

Grease, Fast Times at Ridgemont High, American Graffiti – all these classic films depict a teen driver piling their friends into their cars and going out to have fun. This may have once been a reality, but today’s teens may never be able to live out these memories with their own friends due to the strict laws that are in place for teen drivers.

In the state of California, new drivers under the age of 18 are to follow certain laws that restrict them from driving at certain times and with certain people. These laws include a curfew of not being allowed to drive between 11 p.m. and 5 a.m., as well as being unable to transport passengers under 20 years old unless accompanied by a California-licensed parent or guardian, a California-licensed driver 25 years old or older, or a licensed or certified driving instructor. I think that these laws are unnecessary not just because they can be a problem because they prohibit teens from going places with peers, but it mostly a problem for parents who are unable to drive their kids and need someone to drive them.

Personally, I live in a neighborhood where most of the kids all go to Mater Dei; naturally many carpools have been created because of this. When I got my license over the summer, I was asked by numerous parents about taking their kids to school because their work schedules made this difficult to do on their own. However, being a minor and a new driver, legally I am not allowed to take them to school. Being unable to help other students due to these stringent laws puts a burden on parents who have busy work schedules.

Junior Morgan Jennings believes the law is unfair but understands that it is in place to keep teen drivers from distractions caused by having peers in the car with them.

“I feel that it gives us boundaries but at the same time I feel that we have other things going on at different times so it can be annoying,” said Jennings, who just earned her license a few months ago. “But I think it’s there for a reason so I respect it.”

Currently, the licensing age is 16, but public opinion favors an increase in the licensing age to 17, but why? I don’t understand what a 17-year-old would do differently behind the wheel than a 16-year-old, or even someone in the is much older.

Many other states are making even more difficult for teen drivers by imposing new laws that further constrain their driving capabilities. In a New York Times article, reporter Kate Zernike writes about how, in New Jersey, minors are forced to put a sticker on their license plate to show that they are under 18. This requirement is in addition to curfew laws and passenger restrictions like in California.

“…in New Jersey, which has long had the nation’s highest licensing age, 17, lawmakers are pushing further, requiring teenage drivers to attach a red decal to their license plates to make it easier for the police to enforce a curfew and passenger restrictions,” Zernike said.

This decal may make the lives of law enforcement easier, but it is putting many minors at risk for predators to pick them off and possibly put them in danger. One source on Zernike’s article was concerned for his teenage daughter’s safety.

“He has instructed his daughter not to use the decals, saying he feared, as others do, that they would make her the target of sexual predators,” Zernike wrote.

Zernike describes how one parent says that the law doesn’t make sense because of the fact that most of the military consists of young men and women, including teens.

“We have young people flying Apache helicopters in Afghanistan to protect us; you’re saying you can’t drive a car past 11?” Mr. Trautmann, one of her sources said.

In fact, teens undergo intensive training in order to drive legally. Before getting your license, you are required to undergo several hours of drivers education in order to just get your permit. I personally used a program that required you to log 30 hours of online training in order to finish drivers ed. This took me a few months because of the requirement, but it also made me extremely prepared for my permit test, and I passed with only two questions wrong.

After receiving your permit you have to meet with a trained professional three times for two hours of behind-the-wheel training. My instructor was extremely informative and really helped me as far as learning the rules of the road and the proper ways to react to situations that could lead to an accident or to my own personal safety being at risk. This training prepares anyone who later gets their license with the proper tools to use while behind the wheel. When you first get your license you’re more likely to remember these tips than those who have had their license for years. If this is the case, then why are new drivers seen as untrained and unable to drive the same as any other driver? Does society not believe that the training they’ve received and the hours of behind-the-wheel practice they’ve done is not enough? If this is the case, then what’s the point of even having training if it’s not enough to have the same freedom as other drivers?

These laws are unnecessary and problematic, it’s important that we do something to change them for the future.

If the law is to continue, I think that it should be applied to all new drivers because I believe that anyone with a new driver’s license is at risk to cause an accident, not just minors. Why should minors be the only people with strict laws put on?